Besides Turin and Milan, DSMt is very often organized in the towns Cuneo and Borgo San Dalmazzo, both in the Cuneo region.

Cuneo is the capital of the third largest provincial area in Italy, which also is home to some of the best Italian wines. It is located in the region of Piedmont and the surroundings are known for the beautiful variety of landscapes found here such as valleys, rivers, plains and hills – perfect conditions to produce some of the best wines in the world.

The town boasts different architectural landmarks and cultural monuments and the area is perfect to marvel at the scenic views of the Stura di Demonte Rivers and the Maritime Alps. If you are looking for an adventure, Cuneo is also famous for its excursions, skiing and mountaineering.

The town of Cuneo has architecture that is different from other parts of Italy. Its Renaissance style arcaded main street lined with shops and cafes gives it an elegant appearance and its old town center dates from the 12th century when it was a fortified town. Cuneo makes a good base for excursions into the mountains, valleys, and the nearby small towns of southern Piedmont.

Cuneo is on the rail line between Turin and Ventimiglia on the coast. There is good bus transportation to Piedmont towns and villages as well as around the town itself. Bicycle and car rentals are available.

Cuneo has a very small airport, with flights to Elba Island and Olbia on Sardinia and a few European destinations.

There are airports at Turin (see  Turin Airport Information) and Nice, France, which serve more cities. The nearest large international airport is in Milan

The SADEM bus service between the city centre and Turin Airport has several stops en route including Porta Nuova railway station, Porta Susa railway station, via Stradella 242/245, Borgaro and Caselle city centre. Buses go from 4:45 am till midnight every 15 minutes from Monday till Saturday, and every 30 min from 5:30 am till midnight on Sunday.  For information and timetable confirmation, visit http://www.sadem.it/media/6355/000268.pdf or call ph. +39 011.3000611

There is a possibility to rent a car or to take a bus or a train from Turin to Cuneo and Borgio San Dalmazzo, link:  http://www.rome2rio.com/it/s/Torino/Borgo-San-Dalmazzo

A bus stop from the airport is Porta Nuova railway  (Google maps link:  link) located in the very center of Turin. It is possible to take a train to Cuneo and Borgio San Dalmazzo. For the train information and timetable, please visit  http://www.virail.com/trip-turin-borgo_san_dalmazzo/2016-06-11 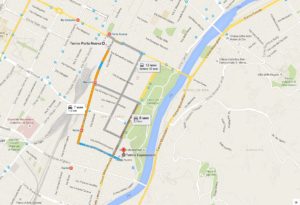 If you want to go to Bus station Torino Esposizioni, there are 2 stops between Turin and Borgio San Dalmazzo, further information for which is available at  http://www.rome2rio.com/it/s/Torino/Borgo-San-Dalmazzo